Havok – Time Is Up (Candlelight Records) 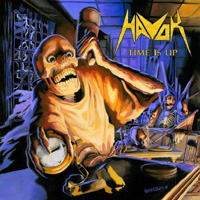 There are roughly 80 million bands parading around with the “Havok” moniker, one of which resides in this scribe’s hometown of Pittsburgh, PA. The Pittsburgh Havok are quality dudes (and very polite), going as far as to spray-pain their logo (which is just like this Havok’s logo) on the side of their car. Such a tactic always made yours truly wonder if that Havok was aware of this Havok, but last we checked, the logo was still adorned on the side of their Chevy Cavalier. Talk about dedication. And a lack of search engine acumen.

Nevertheless, Time Is Up is Havok’s second full-length, and is stocked with the predictable array of thrash riffing and lyrical topics. While their songs are no more remarkable than Merciless Death or Vindicator, the Colorado-based act manage to pull a few totally punishing thrash riffs out of their retro asses, which is probably why this album was able to scuttle up to a 7 when in theory, it should be a 6.

The bulk of Time Is Up wraps its hands around screechy vocals, gang-choruses, and prominent Metallica circa 1983 guitar-action, something that should be totally expected at this stage in the game. Where the album finally clicks is on “The Cleric,” a song that boasts one of the more throttling main riffs in recent thrash memory, rivaling the recent works of Exodus (i.e. “Funeral Hymn”). “Out of My Way” works in similar fashion, employing a nice little syncopated guitar-double bass run that ultimately make this album a somewhat worthwhile listen.

With only two songs of note, Time Is Up will more than likely fall right into the thrash morass, like so many before it has. For Havok, they’d be best advised to employ more of the downright brutality heard on “The Cleric” and “Out of My Way.” It’s not like they have to take the Warbringer route (who are infinitely less interesting than Havok), but it sure beats taking the easy way out and playing standard operating procedure thrash, which is what most of Time Is Up is.