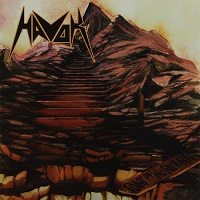 Released in conjunction with Havok’s spring/summer touring schedule,Point of No Return is a stopgap release for the Colorado-based thrashers, enabling the band to toss in two new jams and some familiar covers. Aside from the fact they chose the most obvious Slayer cover (“Raining Blood”), this is a relatively fruitful release from one of North America’s few shining thrash beacons.

Time Is Up. Speed has never been the band’s calling card, for power-packed riffs and tight arrangements are what Havok does best, and it’s evident on both songs, especially “Point of No Return” which unfurls into some instant headbang moments. As mentioned above, the inclusion of “Raining Blood” is a bit of a detractor, even though it directly follows “Postmortem,” which frankly, is a much better song

only because it’s not played-out. Elsewhere, Sepultura’s “Arise” gets the cover treatment and is not quite as lively as the original, but it’s air-tight.

Rounded out by videos of “Covering Fire” and “D.O.A.” Point of No Returnshould be an easy and quick tour pick-up for those seeing the band live in the coming months. Beyond that, it should help ease the band into the songwriting process for the pivotal follow-up to Time Is Up.