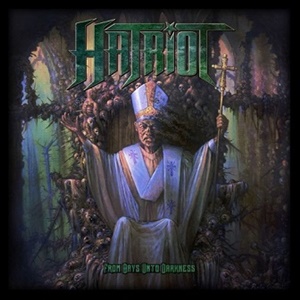 Five years removed from their last studio platter Dawn of the New Centurion changes are afoot in the Hatriot camp. Most notably, the absence of Steve ‘Zetro’ Souza on vocals – as his activities with Exodus have picked up significantly in the studio and touring the globe. No worries though – as one of his sons, bassist Cody Souza, picked up where his dad left off, adding a bit of a triad threat with growls and screams to make From Days unto Darkness a memorable, dynamic third studio record.

The opening sequence of “One Less Hell” contains everything from tranquil acoustic guitar parts to furious arpeggio-laden shred action before the crunchy, heads down thrash activities start – and it’s at the 1:41 mark that Cody’s raspy roar assures listeners that he could certain give his Dad a run for the money in mirroring his voice – adding that extra scream/growl propensity when necessary. While the debut record went for shorter, tighter songs and the follow-up developed some longer seven-minute cuts from time to time – this outing contains a mix of both, totally dependent on the arrangement and how the instrumental sections flesh out. The machine gun double kick thunder and drop on a dime transitions/fill work puts drummer Nick Souza on standout mode for “World, Flesh & Devil” – obviously taking modern and death percussion mentors into account just as much as the thrash brigade for his influences. Guitarists Kosta V. and Justin Sakogawa throw down a riff parade to treasure – lots of down-tuned chord progressions against some jackhammer verses and fleet of finger hooks, veering close to Exodus territory circa Fabulous Disaster on a highlight such as “Delete”, Cody adding in some proficient bass interplay to spice up the circular rhythms. A musical carousel starts “Carnival of Execution” on a mid-tempo barrel ride to headbanging mania, while the tribal death aspects musically and vocally enhance an already twin guitar harmony enticer like “Frankenstein Must Die”.

What does this mean overall for Hatriot? From Days unto Darkness slides in seamlessly between the respected thrash base while injecting some of that modern death/aggressive nuances that comes naturally due to the youth of the players at hand. Tasty and rich with prime-time musicianship, Hatriot aren’t resting on laurels- instead putting their best material and execution forward.