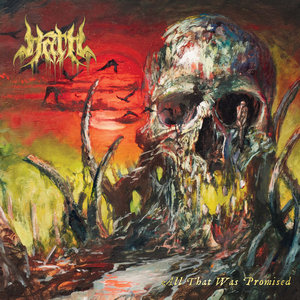 New Jersey’s Hath left quite an impact with their full-length debut, Of Rot and Ruin.  Featuring some expansive growth from their earlier EP, it masterfully took elements of death and black metal, not to mention more progressive and melancholic elements into a sonic whirlwind that knocked most listeners back and leaving them hungry for more.  Follow-up All That Was Promised comes with some lofty expectations, after such critical and fan praise, but it still manages to exceed the ideals dreamed up for it and deliver another exciting dose of extremity.

First things first, this nearly the same level of expansion that the band took in moving from their EP to Ruin, but it doesn’t need to be either.  They latched onto something full of promise with their last album, so it makes sense that this release has all of the elements that made the band shine and takes them to new levels.  The expansion from three piece to four is definitely noticeable in their sound, allowing them to flex some greater cinematic muscle this time.  While Ruin definitely had a massive sound to it, the most notable uptick with All That Was Promised is how grandiose and monolithic the album sounds.  As the moody slow build into lead-off song “The Million Violations” quickly proves, there’s a certain grandeur to the band’s approach this time, and it provides a potent springboard to launch into more extreme territory.

While that somber, dreary aspect to the band is back in full force, it feels more gripping and dynamic.  “Death Complex” provides a nice example of this, with its more mid-tempo pace and ominous riffing all but grabbing you and demanding your attention with an otherworldly attraction to it.  When the band goes full-tilt into aggression, this also allows them to feel more menacing and abrasive (even if it does stay surprisingly catchy considering the extremity of it).  Recent single “Lithopaedic” fills itself to the brim with intensity until it spills over into a maelstrom of blasts, growls, and punchy riffing.  The weaving in of melodies, be they frantic or gloomy, stays as a constant in the band’s repertoire, allowing them to really stand out and provide moments that you want to return to.  The sense of satisfaction they provide in building up to one of those moments, and then have it all release, such as such as the second half of “Iosis,” is simply breathtaking stuff (not to mention the quick jump into pulverizing blasts that start off “Decollation”).

It’s hard to find much fault in the way that Hath continues to provide extreme metal with a progressive and introspective core.  They can provide as much of a battering ram of aggression that anything else in the genre can, but they lock in their own success by melding it with some splendid melodies that feel quite at home within the mix.  Thus generating something that feels gargantuan but approachable in tone.  All That Was Promised delivers on expectations and hopefully thrusts Hath further into some deserved spotlight within the scene.