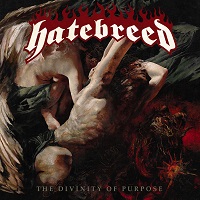 “All pit, no shit, eh?” How long do you think until that pops up on the back of t-shirts? Hatebreed, specifically Jamey Jasta, have proven to be rather adept at coming up with cool slogans, ones that serve as a rallying cry for their brand of metallic hardcore. On The Divinity of Purpose (their seventh overall), the metallic, or “metal” aspect of the band has taken a backseat to the tried-and-true hardcore bashing of Satisfaction is the Death of Desire and Perseverance. Translation: Hatebreed is up to their old tricks.

While some in the ever-difficult-to-please hardcore scene may have balked at the flurry of guitar solos and metal-like riffs found on 2009’s self-titled album, The Divinity of Purpose largely stays away from that. Lead single and lead-off track “Put it to the Torch” is a prime indicator of this, whipping up a maelstrom of throttling riffs and Jasta’s hoarse-of-coarse vocals. The real heaviness and groove comes down on “Own Your World” (love the opening gang vocals – count me in!) and “Before the Fight,” where the band settles into a pulverizing groove.

The cuts on The Divinity of Purpose are purposely shorter, more concise, which for Hatebreed, isn’t saying much. However, the re-emergence of their hardcore credo and stance is the most appealing aspect of this album. Not to say that Hatebreed shouldn’t take more dips in the metal pools, but the cross-breeding of hardcore and metal is where the band feels most at home. All pit, no shit indeed.