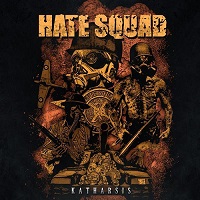 German metalcore, as we’ve come to know it, typically runs down the lines of borrowed Gothenburg riffs and on-loan beatdowns. Originality has never been the scene’s long-suit, just ask Maroon, Heaven Shall Burn, Caliban, and perhaps a dozen additional bands

we can’t remember at the moment (we’re getting old, mind you). In semi-contrast to those bands is Hate Squad, who have been kicking the hardcore jams out since the mid-90’s. They’re far from a heavyweight act, but on Katharsis (their sixth full-length), their knack for solid, yet unspectacular death metal-tinged tough guy hardcore is enough to pass the bar.

The band doesn’t have one particular go-to move on Katharsis, preferring to find the niche between early 90’s death/thrash (somehow Harmony Corruption-era Napalm Death is recognizable) and their hardcore exploits. Make no mistake – there is more metal on this album than ‘core, and it’s part of the reason why the churning “The One” and groovy “Hatebomb” are solid numbers, especially “Hatebomb,” which sounds like a more muscular Prong. (Sheesh, we’re really all over the board with wry 90’s metal references here, aren’t we?)

Burkhard Schmitt has more than a few Barney Greenway moments on the album’s 13 tracks, which probably explains the above Napalm Death reference. Either way, he lends a particular amount of girth to the proceedings, and it makes jams like “A.P.A.B.” (love the “We don’t like you!” barks) and the catchy “Old Times, Good Times” which is probably an ode to the band’s formative years.

Frankly, it’s weird to hear a German metalcore album without traces of At the Gates and In Flames. You can thank scene overload for that, yet Hate Squad has managed to persevere for 19 years and with Katharsis, they are virtually an immovable object, happily stuck in the muddled mess of death metal and hardcore.