Hatchet – Dawn of the End (The End Records) 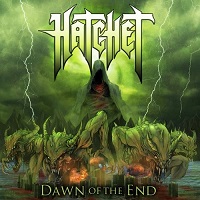 The return of San Francisco thrash band Hatchet comes with a total lineup upheaval on their second full length Dawn of the End. In the midst of completing three DIY tours in support of 2008’s Awaiting Evil, only guitarist Julz Ramos remains – tackling double duty now as the act’s vocalist. Bassist Travis Russey joined in 2010, followed by drummer Eli Lucas in 2011 and second guitarist Clark Webb last year, so the five-year break between records can be quite beneficial in terms of their creative chemistry and outlook in this second generation thrash explosive era.

Hatchet has a simple but aggressive game plan in these 10 songs. Effective rhythm and riff stop/starts, heads down in a mid-tempo and above speed manner, Ramos spitting out words like a maniacal beast while the choruses feature shouting calls to action. Ramos and Webb exchange spirited lead breaks that rival Forbidden on “Signals of Infection”, while musically other cuts such as “Silenced by Death” and “Fall from Grace” blend the punishing early Death Angel days with a little bit of Testament.

Lucas pushes Hatchet away from the middle of the road pack into a serious threat for long term impact with his drum performance. Previous drummer Dave Wert lacked proper fluidity to hold his patterns together beyond pedestrian ability- where Lucas comfortably executes at build ups and slower transitions, plus powers through the up beats. Check out his shape-shifting on “Screams of the Night” and “Sinister Thoughts” to realize that drumming is just as important as solid guitar work for a professional thrash sound.

Much like Bonded By Blood, Hatchet could carve out an impressive niche of followers based on this fine outing