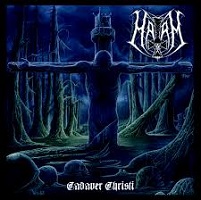 Harm is giving this writer a serious case of deja-vu.  German-based old school death metal?  Check.  Released through FDA Rekotz?  Check.  Buzzsaw guitars and a mix of Autopsy, Dismember, and Celtic Frost.  It all seems so familiar.  Oh yes, it’s the recently released Nightmare Vortex by FDA Rekotz label-mates Slaughterday!  Ok, so it may not be exactly the same, but it certainly warranted a double-take the first listen.

So how is Cadaver Christi different then?  The most obvious is a more punk-ish attitude on the tracks.  It’s a tad more aggressive and in your face for much of the album’s almost 40 minute run-time.  The crunch of the guitars is so thick, you’d swear you were standing next to an actual chainsaw.  Even the bass is audible and massive, and complements the super heavy approach.  The visceral nature of tracks like “Mustard Gas Terror” work for a quick fix of adrenaline fueled death metal rage.

Unfortunately, the band’s pension for aggressive speed and groove is ultimately it’s biggest problem.  Listen to one song, and you’ve encountered the same formula that you’ll hear on the entire album, with the exception of “Blood for God”, with its slower and melodic groove, and the doomy beginning to “Harmageddon”.  While there are some melodies, there aren’t enough to distinguish the songs apart from each other and the solid yet not outstanding musicianship doesn’t do much to keep Cadaver Christi from being one 40-minute track.

With the deluge of similar bands over the last few years, there’s clearly a market for this and there will be many that eat this one up.  However, Harm do little to differentiate themselves from the rest of the retro revival and leave virtually no distinguishable mark to call their own.