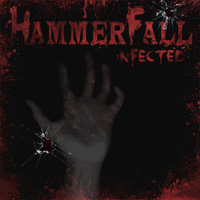 Has it really been 15 years since Glory to the Brave? For a band that many thought would burn out as fast as they came, Hammerfall have managed to hang around, dominating the Euro festival circuit, all the while churning out album after album of workmanlike power metal. In fact, the band has done little to change since the aforementioned Glory to the Brave – you could put Infected smack-dab against it and the two are identical in approach. Does that make Hammerfall the Motorhead of power metal? Maybe.

At any rate, Infected finds the Swedes with a handful of jolly, stomping tunes at their disposal, specifically opener “Patient Zero” (note: I wonder if the band knows the sampled audio referencing Sector 7G is the name of Homer Simpson’s area on the Simpsons) and lead single “One More Time,” which begs for a crowd call-and-response. Both are immediate and infectious (nice one), with singer Joacim Cans pulling out his normal, nasally vocal approach.

Elsewhere, the Accept-inspired “Bang Your Head” (guess what this one is about…) and “666 –The Enemy Within” are worthy cuts, especially the latter. The band traverses down ballad territory on “Send Me A Sign” (initially performed by Hungarian metallers Pokolgép) and it manages to be one of the band’s more tolerable ballads. And of course, a handful of duds appear in the form of the clumsy “I Refuse” and “Immortalized,” which is basically this album’s version of “Hearts on Fire,” minus the cheesy video with the Swedish ice curling team.

Once a band that begged for rampant discussion, Hammerfall have gracefully moved into their role as one of the elder-statesmen of the Euro power metal scene. They’re awfully dependable and predictable at the same time, which makes albums like Infected worth a glance, but make no bones about it: Hammerfall are in no rush to change.