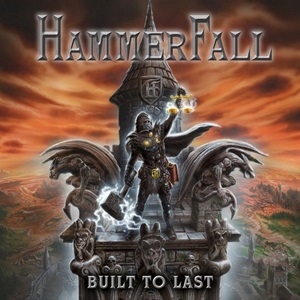 Polarizing can be an apt term to describe this Swedish power metal band because of their rapid ascension to prominence for their debut album Glory to the Brave. Call it a case of perfect timing (summer of 1997) and association (In Flames guitarist Jesper Strömblad co-writing six of the tracks), Hammerfall put the excitement back in a style well associated with 1980’s traditional bands like Accept, Iron Maiden, and Judas Priest. While the follow up Legacy of Kings kept the fire burning for steel, subsequent records tread familiar territory with occasionally mixed results (Renegade and Infected this scribe’s least played). Armed with a new record deal on Napalm, the tenth studio record Built to Last aims to keep the quintet pumping out those power anthems and crowd pleasers that live for denim and leather vests, warriors of a bygone age, primed for metal first and foremost at heart.

Twin rhythms from Oscar Dronjak and Pontus Norgren roar down the axe track tailor made for synchronized hand gestures to the sky while hitting those familiar poses – as “Bring It!” for an opener achieves its desired mission, raising audience interaction through the simple, gang-oriented chorus. Those curious if Joakim Cans can ascend to the upper reaches of his noted higher falsetto propensity only need check out “Hammer High”, a solid mid-tempo marching number that contains Gary Moore-oriented cultural drum parts plus a thoughtful back and forth lead break with proper shred and tasteful moments. Faster material gets the blood flow circulating, as “Dethrone and Defy” is a double bass monster with killer heads down main riffs that recall classic Riot circa Thundersteel while “The Star of Home” positions itself as an adequate successor to Judas Priest from the Painkiller resurrection period.

Overall if there is a fresh nuance to the Hammerfall platform, it’s probably in some of the more epic/folk-oriented textures that make a ballad like “Twilight Princess” or the culturally invested title cut perfect for larger festival audiences, you can imagine the beer steins swinging to and fro as the crowd lock arms and sing or chant in unison. Hector of course makes an appearance on the cover, high on his throne, his weapon in one hand low while holding scales in the other – with plenty of details for cover art lovers to digest. Working with producers Fredrik Nordström and James Michael in Sweden and the US respectively gives the listeners a best of both worlds final sonic output- very much in line with the early albums to these ears, especially in terms of background choirs and biting guitar tones.

The final consensus will be up to the public – Built to Last probably comes closest to their classic sound at least since Crimson Thunder, and will not tarnish their reputation. The clichés never die, metal will live forever.