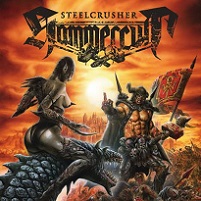 If the ear of Karl Walterbach is to be trusted – and it should – then Israel’s Hammercult are the next viable entry into the death/thrash derby. Walterbach, responsible for signing the likes of Celtic Frost, Coroner, Helloween, Kreator, and more to Noise Records, now guides the band under his Sonic Attack Management umbrella, a rather sterling endorsement if there ever was one. And frankly, that’s all the currency one needs sometimes in this day and age. However, the band’s sophomore Steelcrusher album is certainly legit, a propulsive meld of death and thrash that chucks 13 songs into 43 minutes.

The quick reference points are a blow-by of a sped-up Kreator and Sodom, therefore tapping into Teutonic thrash, yet Hammercult plays with more control than that pair did in their halcyon days. And since the riffs are so brazen and iron-clad, the frenetic pace maintened during jaunts like the title track and “Into Hell” don’t translate as speed-for-speed’s sake numbers; they’re energetic, yet palpable. The could be a tad more careful with their lyrical themes on “Metal Rules Tonight” and “Satanic Lust,” but the inclusion of gang shouts and coarse, hoarse conviction from singer Yakir Shochat is enough for a proper workaround.

The obvious point being that we don’t need any more hybrids of this sort; however, the intangibles Hammercult posses make them a fertile, not-even-close-to-being-realized entity that is full of promise. Steelcrusher amounts to more of a memorable, jagged listen than a tempo demonstration, meaning, that they have the ability to be their home country’s most extreme and interesting metal prospect since Orphaned Land.