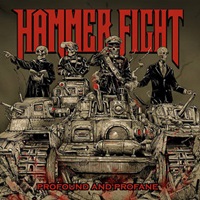 Providing fist to face ‘hard rockin’ metal’ (their tag, not mine), New Jersey’s Hammer Fight aim to please on their second full-length Profound and Profane. Ascending from self-released, self-titled EP status in 2012 to their Horror Pain Gore Death Productions debut album Chug of War the following year, new guitarist Dan Higgins came into the fold in 2014 as well as a bump up to Napalm for this follow up. Keeping the arrangements earthy, lean and mean – the listener gets 12 songs that straddle the crossover tag when certain qualities elevate the musicianship to straight on metal, while other times the gang vocals or pure aggression comes from a hardcore/punk veneer.

Drummer Justin Spaeth wastes no time getting down to killer fill business on opener “Picking Up Change”, the riffs containing that Iron Maiden/3 Inches of Blood musket blast nature that activates adrenaline in the young ones, plus the Biohazard breakdown mid-way through is killer. Lyrically Hammer Fight stick to common man/injustice oriented topics beyond the occasional rock/party anthem, as titles like “Cell Block” and closer “Cult of Conceit” attest. A lot of the double bass and street level guitar play works in tandem for total body throwdowns that crossover thrash and hardcore followers become pit happy for – giving the quartet a load of options direction-wise and for optimal touring partners.

Bassist Drew Murphy has a spitfire demeanor vocally to the high velocity material that makes “Gods of Rock ‘n’ Roll” and “West Side Story” two definite highlights, his mid-range acidic roar in line with a clearer Chuck Schuldnier meets the late great Lemmy- the latter containing some equally killer gang background supplementation and twin guitar lines. Calming things down mid-way through with the mostly acoustic-piece “Low & Broken” possibly works for Guns N’ Roses or Motörhead, but proves tedious because of Drew’s hoarse, off key approach especially during the chorus.

With cover art reiterating their multi-pronged musical attack (skull people and tanks overtaking their domain), Profound and Profane reminds me of a lot of that early to mid-90’s movement when Life of Agony and Pro-Pain gained acclaim- only twisting things up in a more ‘traditional’ metal nuance. 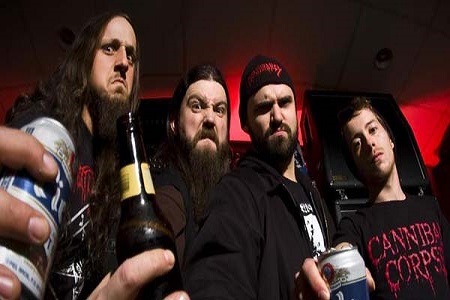 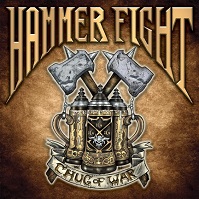