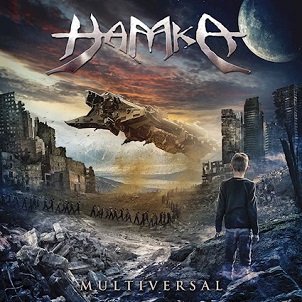 Power metal of this ilk has always been un-stylish, which may explain why so many bands still play it. “Cool being uncool.” France’s Hamka is one of those fluffy, would-be cheesy power metal outfits who have limited appeal, a somewhat redeemable cross of Angra, Battle Beast and Triosphere, if only because they have a female vocalist in the form of Elisa C. Martín (ex-Dark Moor). On the band’s second full-length Multiversal, drama, cliché and plenty of melodic peddling are in high order.

Martin is Spanish and while you’d have a hard time detecting her native tongue in her vocals, they are a bit of an acquired taste. She’s got a thick, often tongue-tied belt, becoming quite evident on cuts such as the really light “Earth’s Call,” which harkens back to Angel’s Cry-era Angra and the necessitated ballad “Dark Night Falls.” And while she’s unable to put these songs on her back, she’s certainly a sore thumb type of power metal singer — you can easily pick Martin out from any number of vocalists.

Songs such as “Hope,” “Modern Cowboys” and “The Path of Pharaohs” is easily in Battle Beast’s wheelhouse, especially “Hope,” which, frankly, could certainly be nicked by the Finns. This is not to suggest Hamka don’t have their originality house in order, but instead, it displays the limited range power metal bands of this variety have. Either you’re pounding down the doors with manic double-bass and dog whistle vocals, getting sensitive and reflective by way of a ballad or trying to write anthemic, mid-paced cuts which invariably makes it sound like ’80s arena rock. Any which way Hamka turns they’re running into a wall, but Multiversal, with its innate fluffiness and pop ease, should saddle up nicely for its core audience.