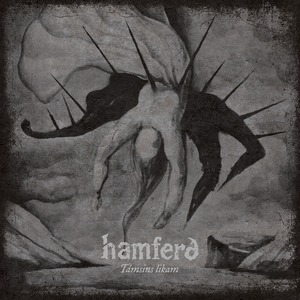 Although also birthed from the Faroe Islands, just like folk metal warriors Týr, Hamferð is a different sort of metal band entirely. Gripped by melancholy and doom, there’s a haunting and bleak approach to their funeral-esque doom – but not one that’s without a chunk of gripping melody. Támsins likam may champion the morose, but it’s also not an album you’ll soon forget.

While there are some heavy moments on Támsins likam that emit a ‘soul crushing’ vibe, it’s the atmosphere that really reigns supreme. Támsins likam is also a concept album (in fact tied to their previous release) and the feelings throughout emanate a strong sense of sorrow and loss. The band isn’t afraid to just outright slow things down and mellow them out – this becomes evident with the opening cut “Fylgisflog,” where gentle keys, clean guitar, and sung vocals immediately grab the listener’s attention with their emotive quality. It allows for a building up of feelings that all but topple the surroundings when heavier riffs and deep growls overtake the landscape. It’s a winning formula that the band takes full advantage of. With some tracks soaring towards the 10-minute mark, everything seems methodically planned with regard to allowing the right amount of time for each track to resonate with the listener fully before they move to the next piece. Jón Aldará’s (also of Barren Earth) vocals do deserve some special attention – sung entirely in Faroese, yet you can really hear the pain come out when he’s singing. Not to disservice his growls, but the clean vocals have some incredible presence.

Though it’s been a few years, Támsins likam is worth the wait. From dark and crashing riffs to melancholic introspection, Hamferð have an approach to doom that’s worth delving into. Perfect material for those who want some uncompromising bleakness to envelope them and never let go.