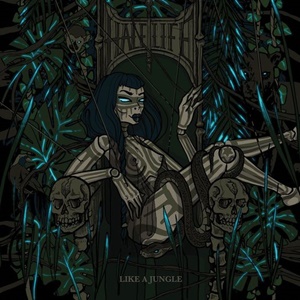 This Italian act Half Life started in 2015, playing covers for classic heavy metal artists like Iron Maiden, Judas Priest, Saxon, and Helloween while getting their chops stronger for original material. Their first EP I’ve Got to Survive hit the market in 2019 -the following year they would change out vocalists as Alessandro Minervini joined, setting the stage for this full-length Like a Jungle. After a few playbacks, its quite apparent that these musicians possess potential in certain areas of their musical direction and performances – while struggle to attain acceptable standards in others.

The guitar work of Guerrino Mattioni contains all the ideal catchy rhythms as well as bluesy, thoughtful lead breaks – hitting the right ending squeals for “Virus” while laying down the twin guitar harmonies / galloping passages during “Rearrange” that keep followers hoisting fists to the sky. The bass play from Gianluca Carai contains that fluid intricacy that put Steve Harris on the map, even in a semi-acoustic/semi-electric ballad like “The Last Time”. Most of the songs roll along at a steady four to five-minute clip, the focus squarely on tight hooks/melodies that get in, get out, and get the job done. The semi-shrieking nature to Alessandro vocally may irritate most people. It’s as if he’s caught between puberty and power /glam metal, right away squeezing out notes that sound awkward in the opening title track, although getting a little better in a lower to mid-range register in the verses for closer “We’ll Walk in Silence”. Couple that with a very synthetic tone to all of the drum kit sounds and you have the makings of a disjointed record which can be tough to handle in one sitting – even at 36 minutes.

At least the cover art has a bit of mystique to it even with the expected skull adornments. Half Life really need more quality control to get more than a local following based on Like a Jungle, as they really are in the minor leagues compared to their influences and heroes.