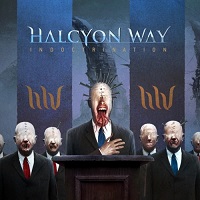 Gotta love when a band takes a calculated gamble by putting a cover song from a movie (and a bad one at that) on their album. For Atlanta’s Halcyon Way, the inclusion of “Stand Up” (from the movie

Rockstar) caps off an album of mildly-flawed, but impressive display of melodic metal. The band has a noticeable power metal thing going on by way of singer

Steve Braun’s molten vocal chords, who more times than not, serves as the album’s main selling point. And yes, their version of “Stand Up” is pretty rocking. Steel Dragon forever!

At any rate, Indoctrination finds itself in the crossfire of vintage Fates Warning, with some equally-vintage Queensryche to boot. Yet, this isn’t some classic metal re-write, as Halcyon Way takes steely riff-action to some rather cool places on “On Black Wings” (please lose the growled vocals) and the title track. A lot of the songs

are frontloaded with some type of hook, whether it’s a quick falsetto from Braun, or a melodic spurt on “The Wages of War.”

Easy to get roped in by the chorus of “Our Finest Hour,” as it catches Braun at his most confidence, and is rounded out nicely by some punchy thrash riffs. Beyond that, “Revolution Is Now” crosses into cheesy territory on the lyrical front with some ill-timed patriotic bravado (the song

is still of quality, though), while a techno remix of “The System” (which originally appeared on the band’s 2008 A Manifesto For Domination) is quite uh, awkward for a progressive power metal band.

, Halcyon Way proves its worth throughoutIndoctrination. Clearly the band knows what it has with Braun and has made the wise move of making his vocals the band’s raison d’être. With such a guy in the ranks, it’s no wonder they pulled off “Stand Up.” Quick fact: Sammy Hagar wrote said jam. Nice job, Red Rocker.