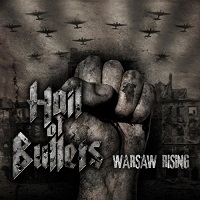 Responsible for the best death metal song of the last five years in the form of “Ordered Eastward,” Dutch death metal supergroup Hail of Bullets are pulling out the ‘ole stop-gap EP with Warsaw Rising. And we’re dead serious with that assessment: “Ordered Eastward” will ruin your day and bulldoze your house.

With the indomitable Marten van Drunen (formerly of Pestilence, now in the reformed Asphyx) on the mic, it’s worth the price of admission alone (or free download, you thiefs) and in typical fashion, the man turns in another rousing performance on three new cuts: “Liberations,” “Warsaw Rising” and “Destroyer.” Somehow, van Drunen can employ the same vocal pattern on each song and still sound retain his place as one of the top five best death metal singers ever, so there’s your selling point. Musically, the band is still operating within more mid-tempo, classic Swedish death metal confines, rolling out some major crunch on “Warsaw Rising.”

A trio of live recordings (“Red Wolves of Stalin,” “Nachthexen,” and “The Crucial Offensive”) round out this six-song EP that continues with the band’s theme of World War I-inspired lyrics. War is a cool topic, definitely, but van Drunen can sing about scrubbing toilets with a toothbrush and it would still sound brutal.