Hagalas – As A Unit (Inverse Records) 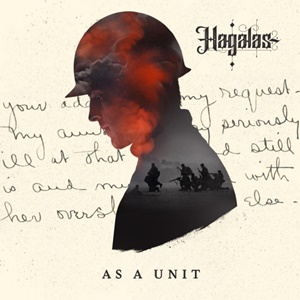 The art of creating songs has shifted over the years. So it’s nice to hear when bands in modern times still get together in person, step up in a musical man-cave, start playing to see what comes out – and hopefully develop a set of songs worthy of hitting the studio to release to the public. Finnish quintet Hagalas subscribes to this work ethic for their second EP As a Unit – thematically following up the first released single “Destination: Genocide” looking at war, the struggle of humanity and refugees, very poignant considering the current situation for the people of Ukraine as Russia wages war on that country.

We have musicians who live for a Scandinavian brand of melodic death metal – enveloping listeners through a circular rhythm/harmony guitar presence, strong rhythm section execution that shifts from low to mid-tempo gears in the blink of an eye, all the while allowing for the vicious gritty screams, growls, and occasional narrative sample/soundbite appear as dynamic fuel to the proceedings. Pagan/cultural-oriented runs appear during “Animal Farm”, intertwining the feel of Dark Tranquillity, Sentenced, and a bit of Amon Amarth as the penetrating growls and screams from Kalle Korhonen raise hair (or melt glass) in a montage of early Alexi Laiho meets Anders Friden. The title track appears as the final salvo, the longest cut at 6:37 and probably the most diverse in terms of atmospheric and tempo changes. Listeners will take a journey, going from tranquil, somber clean guitars, mysterious bass, and doom-styled drumming to tremolo-infused blackened/death parts, semi-blasting snare/kick measures, the final third of the arrangement containing infectious hardened rhythms as well as layers of twin guitar harmonies that leave you breathless.

Hagalas possesses all the right traits to step up the ranks within the melodic death metal template. Aggressive when called for, addictive in riffs and hooks, plus injecting that right groove and shifting atmosphere to keep brains and bodies engaged, As a Unit is impressive.