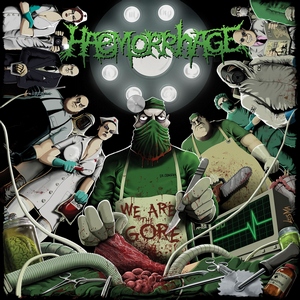 The Spanish goregrind veterans of Haemorrhage are already up to their seventh album with We Are the Gore. Their first since 2011’s Hospital Carnage, the band has keep themselves busy with plenty of EPs, splits, and a live album to ensure that there has not been a shortage of gore in the time in between. And while We Are the Gore sticks to the mantra of ‘if it ain’t broke,’ it’s still some pretty polished stuff.

At fifteen songs in 35-minutes, We Are the Gore continues the Haemorrhage approach to goregrind. Expect a very healthy dose of early Carcass, Exhumed, Aborted and the like to surface as the band quickly blasts their way to the 2-3 minute finish line. It checks all the necessary boxes for the sound, but is never at a loss for visceral charm. From the buzzsawing guitar riffs and rampant blast beats, it lays the groundwork for a cutthroat listen, even if its familiarity is sometimes more than passing. High rasps/low bellows hit their mark vocally, and with song titles like “Bathed in Bile” and “Gynecrologist,” you know they aren’t holding anything back from a lyrical standpoint. Despite the primeval assault, the band can leverage groove when they need to switch things up (“Miss Phlebotomy”) or dish out some sharply melodic soloing (“Medical Maniacs”) for an added bit of diversity.

It’s all about the presentation and energy when it comes to We Are the Gore. Haemorrhage know what works for them, stick to it, and refine it as necessary to provide the most intensity for your dollar. For those goregrind fans who like their Carcass-y material with plenty of carnage, this is exactly what the macabre doctor ordered. 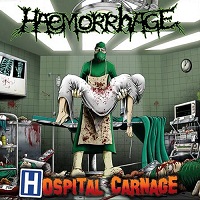