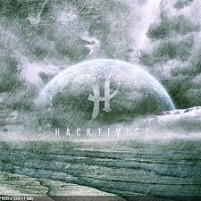 Love it or hate it, the world of djent has been around long enough and populated by enough bands to reach a point where it takes on a myriad of peculiar and exotic new forms. In the last year alone, there has been a variety of groups that have emerged with the core sound expressed in different ways has been staggering, so it was only a matter of time before someone tried what Hacktivist has done on their debut Hacktivist EP: the inclusion of rapping. For many the percussive nature of djent has always been a little too close to nu-metal for comfort so for those the inclusion of rapping isn’t likely to be surprising nor is it likely to win them over to a sound they already dislike for various asinine reasons. Featuring a pair of vocalists who often play off of one another and the otherwise somewhat standard assortment of Meshuggah-esque sounds, this EP makes for a surprisingly tantalizing end result.

While comparisons to Rage Against the Machine will likely emerge as the band gains a greater portion of the spotlight, we’ll avoid them here. It does set up an appropriate ground for illustration, however, as the intensely political inclinations of the group are visible from the get go in now stalwart track “Unlike Us.”The interplay here of the two vocalists (whether spouting verses in tandem in rapid fashion or together) is used to fantastic effect, from the poignant to acidic to displays of the ever-familiar bravado (and more!).

The crunch of the genre standard ultra guitars (though here it’s 9 strings, not 8) is enormous, the atmospheric overlay a constant melodic backdrop. All of these features reemerge in the remaining tracks “Blades,” “Hacktivist,” and the long tenured “Cold Shoulders.” The intense trade-offs between the rapping/screaming (occasional) vocalists is complemented further by some colossal clean

Which at times is a real shame, for with only 5 songs and coming in just shy of 20 minutes, this EP is painfully short. While no doubt the desire to get music out there and gauge the reaction of listeners was a core reason for the chosen format, it still leaves the listener wanting much more. To add somewhat insult to injury in that only a couple of these songs are really ‘new’, at least for those that have been following the band for some time, the other songs released in one form or another over the last year. Brevity aside, it’s nevertheless the band putting its absolute best foot forward, perhaps unsure the pace and quality established here could be sustained initially over a release twice it in length. We can only hope moving forward that that will be the case, as off putting to purists as Hacktivist may be, it cannot be denied that they bring together the disparate elements in a remarkably palatable fashion. An end of the year standout!