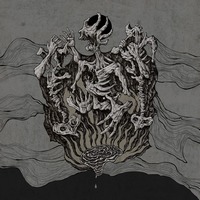 Edinburgh, Scotland is a wondrous place. This scribe and his darling wife have had the pleasure of visiting Scotland’s capital twice, lavishing in the copious amounts of good food, kilt stores every two blocks, and its castle, which needs to be seen to be believed. Not forgetting just how nice most Scots are (something we take for granted here in the States), you’d be hard-pressed to conjure up any extreme metal bands coming from the era. But Haar bucks the notion, busting out a full-throttle black/death outing in the form of The Wayward Ceremony.

It’s of essential importance to note Haar does not play the en vogue type of UK black metal handled by Fen, Winterfylleth, and friends. They’re less on the atmospheric side, and more the riff coupling side, which places them in league with some of France’s more obtuse bands ala Blut Aus Nord and Deathspell Omega. (The band’s bio said the same thing. Nice that we’re in agreement.) So in essence, The Wayward Ceremony primarily gets down with unrelenting bits such as “Sow the Seeds of Decimation,” which contains some odd harmonies and the biting vocals of Gareth. The 12-minute “The Burden of Perdition” is the finest cut on the album, traversing from a folk-oriented beginning to pure disharmonic glory at the song’s break ‘round the five-minute (or so) mark. It displays the band’s depth guitar abilities, where an array of chords are jumbled together, but somehow make sense.

“Coronal Mass Infection,” which sounds like a Carcass song title, emerges as The Wayward Ceremony’s heaviest song, thus displaying the versatility of a band who can easily tread the death and black metal line without a problem. In the end, it’s all extreme metal, Scottish-style, whatever that is. But no, in seriousness, Haar have some clear wherewithal to themselves, finding direction where so many bands are usually just lobbing up riffs and blast beats with hopes of making it work. The Wayward Ceremony is far better than virtually all of that mumbo-jumbo.