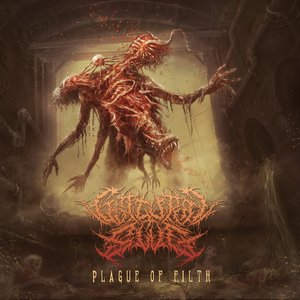 After making some waves in the slam community with two back to back releases in the earlier half of the decade (Intercranial Purgatory and Megalodon) and a single in “Atrocities.” It’s been six years since then, and now mastermind Mikkel Sørensen returns with a new vocalist in Anthony Davis (Gutfucked, Ex-Swine Overlord) for the third album in Plague of Filth.

Guttural Slug makes no apologies for what it is. This is brutal death/slam with a strong focus on massive walls of guitar chugs and extreme vocals. You aren’t going to get technical riffs or elaborate guitar solos, you are simply going to be bludgeoned over the head for a 30-minute period. That said, Davis’ vocals are varied and move in a variety of directions without laying into those completely over-the-top frog croaks and the like (yes, which die-hard slam fans happen to love), which grounds the album in more brutal death territory than Megalodon. There’s not a lot of high-speed stuff here either, focusing on the groovy nature of the mid-tempo riffs and crawling slams, but it’s also a nice reprieve from an overt reliance on the tin can-like blasts many of their peers frequently indulge in. Tracks like “Swallowed by Darkness” works because of the dedication of finding rich grooves to dive into and make your head bob, which just a slight hint of atmosphere. Some may find the slower pacing to be a bit one-note, but in fairness to the direction of the material, the riff quality is high enough that it never becomes an issue. Lastly, the production here is worth noting – it doesn’t have that basement-level audio sound that slam sometimes shares with black metal, and it really augments the sound of the material.

Plague of Filth isn’t exactly a revolutionary album, but it is remarkably fun and entertaining from start to finish. It hits all the marks for an album that wants nothing more than to beat you to a pulp, and keeps things moving in such a way that it’s easy to return to. A good improvement from Megalodon.