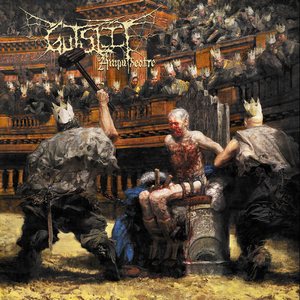 There will be some who look at the cover art and name here and simply say, “eh, brutal death metal.” While Amputheatre is rather brutal in nature, it’s more than a one-trick pony. This Indian act’s second full-length sees them raising the bar and incorporating more influences to their sound than on their debut, Skewered in the Sewer.

Most notably, the brutal death attack of Gutslit is benefitted by bringing in some grind and groove influences. Sure, many death metal bands balance groove with their approach, but the way that songs like “Brazen Bull” take the groove elements in gives them a more modern and diverse feeling. It’s more akin to actual groove metal energy than just a component within the band. Groove gives them some something to rely that offers a different form of heaviness. It’s a nice contrast with some of the more grind-y influences, which songs like “Scaphism” benefit from. Frantic speed runs ease off the pedal and move to equally punishing territory. Elsewhere, some thrashy influences are more apparent (“Brodequin”) and help raise the faster sections a bit more in the brutality department. Shredding solos are a regular occurrence as well, which bring in a short but sweet bit of relent from overall brutality. New vocalist Kaushal LS (Godless) hits all of the extreme vocal styles you’d like to see, and is an effective addition to the band’s in your face ethos.

Amputheatre hits all the desired marks for modern, brutal death metal. Brutality, groove, and grind all come together to design an album that’s more than it may initially appear to be. Can’t go wrong with it if you are in the market for something extreme.