Gunjack – The Cult of Triblade (Self-Released) 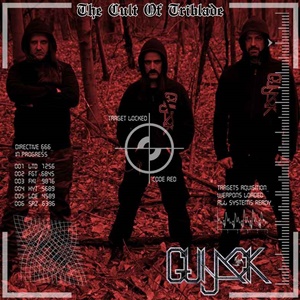 Intertwining a host of old school heavy metal influences, Italian trio Gunjack embrace a lot of the primitive qualities that speak to the spirit of the style on their second album The Cult of Triblade. Forming in 2017 and releasing their debut record Totally Insane a year later on Sliptrick Records, the band decided to step back a bit and soldier forward on a self-produced, self-released basis for this thirteen-song outing. Using stage names like M47 (drums), Gamma Mörser (guitars), and Mr. Messerschmitt (bass/vocals) adds to that historical mystique, beyond the denim jackets and bullet belt imagery and war, social, religion, sci-fi lyrical content that fuels their passion for the genre.

You can expect a raw, in your face sound on all fronts vocally and musically – abrasive and nasty in the guitar tone, a solid punch from the bass, cracking snare and kick elements, plus Mr. Messerschmitt spitting out his words as if guzzling gallons of whiskey from the fountain of the much missed Lemmy K. of Motörhead. The pacing of the songs varies between a straightforward metal template a la Judas Priest and Accept and the occasional punk/rock ‘n’ roll tinged aspects where things can be dangerous a la Motörhead. Gamma chooses to tailor his lead breaks with occasional inherently cultural aspects depending on the theme – “Fukushima” as a clear example of Far Eastern phrasing, while the follow-up “New Cold Soldier” takes on some doom-like maneuvers. The songs stick to a lot of three-chord, basic structures – stripping things down to the essence for energy and hooks as the primary elements to latch onto. As the record progresses, certain modern elements with staccato squeals and grooves along with shouting background vocals can water down the impact a bit – stunting the mood of “Mind’s Annihilation” to the point of irritation, despite a solid NWOBHM/Metallica-like instrumental shift tempo-wise.

The other turnoff for many could be the lower throat action of Mr. Messerschmitt – his Italian accent isn’t bothersome, but his delivery will probably have many thinking of Grave Digger with a little less conviction, making his follow the riff patterns for “Normandy” more comical than probably intended. In the end, The Cult of Triblade may not have much international appeal – but if you like primitive power trio metal the old school way, there may be some signs of hope.