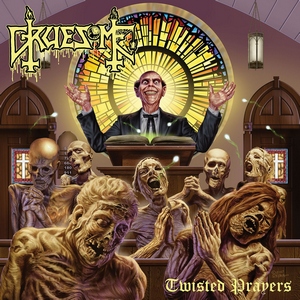 With a well-received full-length and EP behind them, Gruesome’s journey to revel in the mastery of Death continues with Twisted Prayers. The next stepping point along the way is that of Spiritual Healing (if one couldn’t guess from the cover art) and means that things are beginning to shift into more progressive waters. As such, Twisted Prayers delivers the Death evolution while sticking true to the genuine nature that has made it a success from the start.

Sure, Twisted Prayers is aiming right for the nostalgia vein, but it delivers the goods. There’s a lot of bands that are influenced by Death, but Gruesome do their best to replicate every facet of each release. From Ed Repka’s art, to some James Murphy guest solos, to the more socially aware lyrics, to even the recording/production itself (which sounds straight from the era), there’s a level of devotion to the source material that is uncanny. It is what gives the band some of their edge over the droves of other retro acts that do their best to mimic Death. But what also works (and has worked on previous releases) is the sheer amount of energy present. Even now with more progressive leanings in the works, there’s something that makes the tracks pop. Whether the product of passion for the material or the songwriting itself, it’s hard not to be a little absorbed by the tracks. From the breakneck opening of “Inhumane” to bone-crushing mid-tempo thunder of “Crusade of Brutality,” the sense of urgency is there, and goes right in line with the old school flavor and melodies.

While Gruesome will, like in the past, leave you yearning to go revisit an old Death record or two, the fact is that it does stand up well enough on its own for some merit. While their imitation is spot on (even down to the picky little details), it has some legs that will bring you back for another listen just on its death metal knowledge and energy. 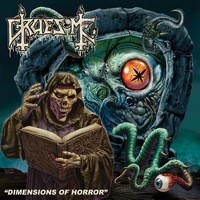 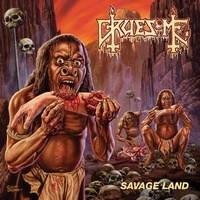