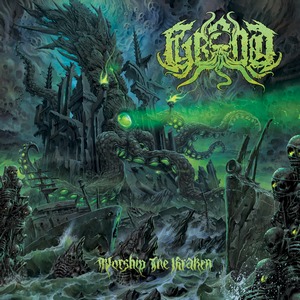 Nothing like a little bit of death metal to get the blood pumping. Grond have been pushing forth their particular flavor of death since a 2005 demo, though Worship the Kraken is only the second full-length album from this Russian act. And the best part is that they aren’t copying anyone else’s playbook to get the point across.

Grond’s brand of death metal is simply that – death. No attempts at trying to be technical or try to give dizzying display of guitar fireworks, no focusing on pure speed to make everything a blur, and no cranking the HM-2 tone to simply copy Entombed/Dismember. Nope, things are pleasantly straight forward, but don’t mistake that for an insult. Grond sticks to the mid-tempo crunch for a larger portion of the time, focusing instead on riffs that lead a heavy assault, while keeping it interesting. Sure, speed comes – but it’s balanced by groovy riffs (see “Devonian Tyrant”) and an overall effort to keep the intensity high. Some solid drumwork (again, not just fixated on blasting for the entirety of the album) and some deep, burly growls add to the mix to generate a sound that feels like genuine death metal, through and through.

There may not be anything earth-shattering about Worship the Kraken, but there’s no faults in it’s execution either. Sometimes the best remedy to lift one’s spirits is an album of pure death metal intensity, and Grond do exactly that. Sit back and enjoy the ride – it’s one that you’ll still want to return to after a number of listens.