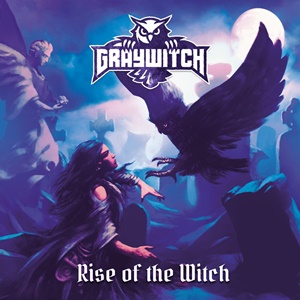 Greece and Cyprus are the homelands for this power metal outfit Graywitch – forming in October 2018 and releasing their debut full-length with Rise of the Witch. Those in the know when it comes to this style are well aware of the strong ties these territories have for power metal, developing a fervent fanbase for international bands as well as a healthy underground swell on the local level. Classic, heavy, and speed/thrash elements also creep into the toolbox for the quintet – although the results at this early stage of the band’s career could be a mixed bag in terms of overall satisfaction.

The twin guitar work of Spyros Vlachopoulos and John Boutzetis has the right melodic/harmony knowledge and proper riff sensibilities. These gentlemen have studied at the altar of Judas Priest, Iron Maiden, Running Wild, and Helloween while you headbang away to their driving rhythms and heroic breaks during “Metalhead” and “The Rise” – galloping and driving material made to be turned up to ten. Piano / cultural touches make the longest cut “My Comrade” at 8:26 engaging as the mood shifts between ballad-like calm passages to spirited double kick/power movements, the final instrumental section featuring more electric harmony magic. At other times Graywitch reach back into the late 70’s/early 80’s for some NWOBHM/hard rock hooks, as you hear on the sultry “Where Are You Baby” that has that mid-tempo groove and simplified chorus for easy retention. Placing three songs in a row early on with ‘metal’ related titles may be a bit too much this early in the game (“Heavy Metal Life” possibly the worst of the three, the galloping sections and chorus very sugar sweet), but the biggest struggles for full-on appreciation will be the warble nature of vocalist Dino Nassis and the digitized/thin drum production overall. Most people will find Dino lacking in distinctive high range confidence, and even in his lower/mid-level delivery doesn’t have strong abilities to sustain notes for very long.

More seasoning and possibly a little coaching to shore up the weaknesses present could be beneficial for Graywitch on the next record. They have an inherent ability for power metal – let’s see if they can elevate the formula on a larger level.