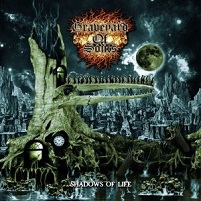 Hey…isn’t that Yoda’s lair on the album cover? Sorry, that should read: “Lair Yoda cover album on the?” See, this is what happens when your significant other really likes Star Wars – you start making references about Yoda when reviewing a metal album. While Spain’s Graveyard of Souls might have a rough go at things in the art department, their depiction of early 90’s European doom on Shadows of Life fares much better than our Yoda impersonations.

The melodies on display here are bountiful, much like how Anathema operated in their Serenades era (see: “Here Come Soft Rains”). Graveyard of Souls can’t match the Cavanaugh bros in the sob department, but they’re able to find the right blend of harmony and atmosphere, particularly on the closing wind-down of “Memories of the Future (We Are).” Even in spite of the predictable death metal vocal spit-shine that accompanies the album’s nine tracks (one instrumental), they’re not as wanton as some of their contemporaries. Some room for the guitar builds is left, which comes in handy when trying to navigate the funeral march of “Solitude’s My Paradise.”

Perhaps a closer reference point to Graveyard of Souls would be Majestic Downfall, who also fancy melodic doom. The songs on Shadows of Life are hardly as realized as the ones heard on MD’s marvelous The Blood Dance, but you can see some potential lurking in the fog. Just look out for those swamp creatures, Luke.