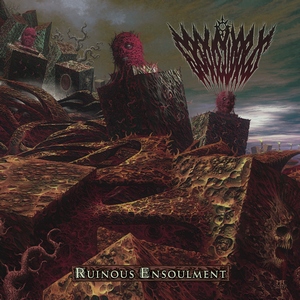 If there’s one thing that many debut albums tend to lack, it’s total confidence in what you are doing. The need to stick to the formula, or wanting to cling to the familiar often sets an initial offering up to be a bit less than the sum of its parts. Which is all the more reason why Gravewards’ debut, Ruinous Ensoulment, is rather surprising. This is a band that knows exactly what they want to do.

What is it that they want to do? The simple answer is to crush whatever lies in front of them. Gravewards is nothing less than explosive at any given moment. Frantic thrashy speed couples with a more war-like old school death metal mentality, and the results is fireworks a-plenty. The energy of old school death metal (though keenly not pointed towards any particular geographical location) is readily apparent in the production and straight-ahead, ‘go for the gusto’ motto, but it’s the thrashy undertones that really sell the band. It not only gives the band a little more attitude, but spikes the energy flow with a bit more character. There’s a slight, quasi-technical flavor to the riffing at times (see “Crypt Spawned Pscychosis”) but it’s never overwhelming to the senses, and keeps more character to it than the current tech-death movement. The occasional groove doesn’t hurt matters either, providing some stomp and aggression into an already assaulting flow (“Thresholds of Lunacy”). While none of these combinations might be the most original, Ruinous Ensoulment still feels a bit more fresh and flavorful than much of the ‘old school’ acts that are simply running through the Morbid Angel or Entombed playbook for the thousandth time.

It’s old school without going too far in any given direction, but with a solid dose of thrash gravitas to really hammer home the point. Gravewards are definitely onto something with their debut, and they sound confident enough to really sell it with ease. Undoubtedly an act that the underground will be championing as word spreads.