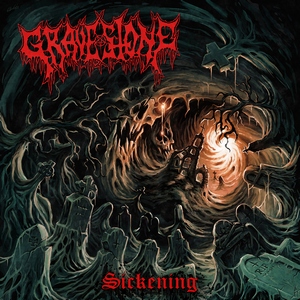 Swedish death metal, straight from the source. No frills, no extras, no fluff. That’s what you get with Gravestone’s full-length debut, Sickening. A fresh face upon the rotten scene, they’ve only had one EP prior to this release, but it doesn’t stop them from channeling their inner ‘90s selves and raising the adrenaline levels to the limit.

While the ‘you know the drill’ line seems to sum up the approach with Sickening, the piece that matters most with these old school-inspired acts is whether or not they embody the spirit of the bands they are looking to emulate, and Gravestone have things locked firmly into place. The buzzsaw guitar tone is spot on – superbly crunchy yet not to the point of overload. The band has just the right combination of full-force adrenaline and catchy melodies – “Fucking Your Corpse in Hell” is particularly noteworthy with its lively and memorable vibe. “Necromaniac” and “Rest in Piss” keep a similar mentality of going for the throat with some chunky riffs, while they can also drop some solid melodies and groove in the slower tempo moments, such as “Rotten Kill.” The vocals take the usual stance as well, but the enunciation behind them helps in keeping your attention (and will to shout along).

Thoroughly Swedish and retro, Gravestone still cut with a fiendish delight throughout Sickening. It’s completely full of energy and ready to give listeners a rampaging soundtrack. It doesn’t shake up the system, but it’s sure to leave you with a sense of brutal satisfaction by the time it’s finished.