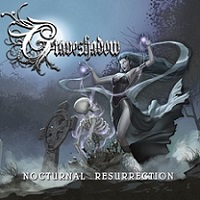 A bunch of relative newbs from California, Graveshadow have not only managed to snag a deal with long-standing Belgium label Mausoleum, they were also assisted in the mixing process of Deathstars main dude Emil Nodtveidt, and, were able to land Primal Fear bald-throat Ralf Scheepers for a guest spot. Not a bad start for a band who are into their third year, eh? Their Nocturnal Resurrection debut contains all sorts of Euro castle-storming flair, sounding wholly un-American (which is fine), while in the process, establishing these four dudes and two ladies as a band who is better than meets the eye.

As per the usual, the X-factor with female-fronted metal, is of course, the singer. Lead vocalist Heather Michele is capable of volleying between a well-rounded clean vocal approach and growls, although she’s advised to drop the growls, particularly in this context. But nevertheless, she’s got some high-rung chorus moments working for her, most notably on opening song/lead single “Namesake,” as well as the thunderous “Winters Come to Call,” which also features some nice Nightwish-like keyboard flourishes. Her best moment comes on “Fading,” where she’s able to work around her growled stumbles and make it Euro-pomp mid-tempo jam work rather well.

While Nocturnal Resurrection and Graveshadow occasionally border on cliché territory, there’s still enough to pull this one through the female-fronted, symphonic mire. There’s so much blending and sameness across said subgenre…it’s remarkable bands are even able to pluck new ideas. Graveshadow, though, seem to have the right hooks and approach to give themselves a fighting chance. Too bad they’re sequestered off in Sacramento; they’d fare much better in European territories. 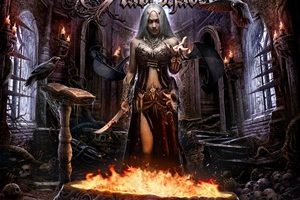