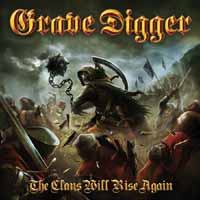 Venerable Grave Digger. They don’t do anything remarkable, nor do they do anything that would make even the most cursory of listeners become annoyed. They’re just Grave Digger, the same band it was 30 years ago, which is exactly how long they’ve been around. The Clans Will Rise Again is their 15th studio album, which is a feat onto itself and while it’s totally workmanlike, it’s… Grave Digger.

In comparison to last year’s quite good Ballads of A Hangman, The Clans…appears to be more Celtic-inspired, full of bagpipes and other Scottish instrumentation. Blending this with power metal is nothing new (Blind Guardian did it as far back as 1992), but GD seems to have taken it upon themselves to totally immerse themselves with this flavor, and it makes songs like “Highland Farewell” and triumphant “Coming Home” two of the more enjoyable songs on this partially bloated 13-song offering.

Singer Chris Boltendal is still up to his old tricks (read: he’s gruff, and only gruff) and at times, it’s comical (“When Rain Turns To Blood”) and other times it fits like an old glove (“The Clans Will Rise Again”). Somehow, the man is able to make choruses big and festival-ready, like on “Rebels,” which is a textbook power metal number that lends to the thought GD still has some gas in the ‘ole tank.

In the traditional metal game for 30 years now, one would think Grave Digger would be a shell of their quasi-glory days (around 1986’s War Games, before their got dumb and changed their name to simply “Digger”), but the old, reliable Germans are just that – old, and reliable. The Clans Will Rise Again, in comparison to their recent output is neither here nor there, but Grave Digger have made a career out of not embarrassing themselves. Doubt it will start anytime soon…