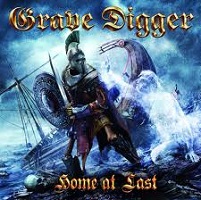 If the Mayans are correct, then cockroaches, Twinkies, and Grave Digger will be the only things left standing when the apocalypse comes this December. The Germans are virtually indestructible and like fellow early metal holdovers Saxon, are remarkably productive. Guess such things happen when you know your time in the music business is about to run out, eh?

Nevertheless, Home at Last is a six-song precursor to the band’s forthcoming full-length, Clash of the Gods, comprised of three new cuts and three live jams. And like everything that preceded it (which is a lot), Home at Last is performed in the same fashion as previous Grave Digger releases, meaning founding member/vocalist Chris Boltendahl still sings like he has a slab of gravel lodged in his throat, heavy metal and its glory (which we back) are the main topics, and plenty of Tuetonic muscle is in tow. The main reason for this release is let two non-Clash of the Gods tracks (“Rage of the Savage Beast” and “Metal Will Never Die”) have some air-time, and they’re backed by some live cuts from Wacken which aren’t anything to go nuts about, save for their classic “Heavy Metal Breakdown.”

MCD’s such as this are always a good idea, especially as means to build up before an album’s release. Grave Digger have been at this for over 30 years, so such knowledge comes in handy for when Clash of the Gods drops in a few months. Now, let’s go fetch ourselves a Twinkie.