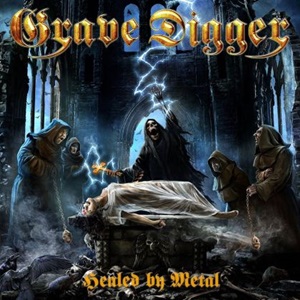 Rejuvenating their profile in North America thanks to two separate tour runs with Blind Guardian in the fall of 2015 and 2016 respectively, Grave Digger remain steadfast in their workman’s like traditional power metal style. Akin to Running Wild one supposes, as they prefer to coast comfortably in their niche rather than rock the proverbial boat for fear of losing the legions. Healed by Metal as the 17th studio album keeps the mid-tempo to slightly faster riffing, steady tempos, and cultural hooks plus mead-hall choruses roaring along at a focused clip – in fact only the closer “Laughing at the Dead” moves past the four-minute mark.

Trademark double bass punctuates key sections of “Call for War”, while the opening title track contains a massive call-to-arms oriented plea from vocalist Chris Boltendahl as the musical underpinning moves along in similar fashion to Accept/ “Balls to the Wall”, a slow locomotive ready to crush the competition. Throughout this record, you get the feeling that 2015’s Exhumation (The Early Years) factors heavily into the throwback elements of playing and execution – “Free Forever” containing an Axel Ritt guitar hook that opens the arrangement and comes back for the chorus that reflects Judas Priest to a tee (“You’ve Got Another Thing Comin’” specifically). Typical lyrical reaper talk penetrates another highlight “The Hangman’s Eye”, the theatrical, darker chord choices against the bigger-than-life chorus sure to go down a storm when Grave Digger deliver this on stage. Even the production details make these 10 tracks sound as if they could have appeared in 1987 as easily as they do in 2017 – crisp guitars, pounding bass, and snappy drumming that doesn’t lose any of its force on aural impact.

And there’s something reliable and special on the battle-tested, raspy rough delivery for Chris Boltendahl, one perusal of “Hallelujah” with his special German-oriented English enunciation ready for large festival attendees to join in unison sing-a-longs after their fair share of beer consumption. Admirable in this cross-pollinated metal landscape that a group like Grave Digger sticks to its bread and butter principles in the face of favored sub-genres or trends. Healed by Metal won’t disappoint the faithful, and hopefully add another staple or two to the long list of classics.