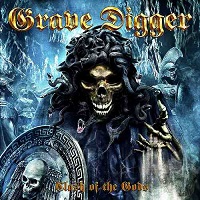 Anytime Germany’s Grave Digger releases new material it’s always a major treat. The power metal stalwarts are back with their 16th studio album entitled Clash of the Gods and what we have here is a classy release brimming with heavy metal goodness throughout. Starting from the vocals of Chris Boltendahl’s harsh delivery, yet on this release he’s infused with fire and brimstone. Hearing his raspy growls gets your blood pumping hot and helps push the front heavy assault to the brink of perfection.

Like past releases, Grave Digger continues to layer their songs with macabre lyrics and tackle history, literature and mythology as subject matter. On Clash of the Gods, Greek mythology is the order of the day and songs like “Charon,” “Medusa,” and the title track are grandiose depictions of the classical traditions found in ancient Greece. I’m diggin’ such attempts, but the masterstroke comes galloping forward like vintage Priest in the form of “Walls of Sorrow” and “Warriors Revenge.” Both songs are aggressive tracks, and climax into full steam headbanging to please the rabid power metal fan.

Of course, Grave Digger is more than just being a simple power metal band. They started life as a pioneering speed metal force back in the early 80’s, so we find this release becoming far heavier, faster and darker than before. At times, the songs echo modern metal roots and resemble such bands like Manowar, Turisas and Alestorm. You won’t find a bad song in the bunch, and in some spots I found the tone evoking death metal territory. Perhaps it’s something new being added to the band’s repertoire and it certainly interjects a fresh new perspective into the music.

On a whole, Clash of the Gods is a strong effort from start to finish. Longtime fans should find the proven formula of Grave Digger most satisfying and what you get is honest to god heavy metal. Through it all the 16th studio effort of the band is the genuine article and I feel this release will ultimately be of the one highlights of the summer. We should all take a swig from our beers and raise our swords in honor of this stunning new release.