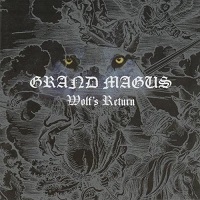 No apologies for the influx of Grand Magus-related content of late – they rock and rock really hard, much harder than the slew of Johnny-tightpants deathcore bands that come across our desk. Methinks no one should balk at the prospect of a fresh album from the Swedes (The Hunt) and a pair of reissues, the first being their seminal 2005 Wolf’s Return, which if memory serves Blistering correctly, was the album that effectively thrust JB Christofferson and the boys on the worldwide global metal map.

Wolf’s Return saw the trio (which at the time, was rounded by still-current bassist Fox and recently-departed drummer Seb) gradually move away from the stoner doom sound that they clung for their self-titled debut and 2003’sMonuments. Even with the absence of doom lollygagging, Christofferson and his “stone age” riffs (his words, not ours) serve the song like no other, as heard on opener “Kingslayer” and the title track, which barrels forth with a bevy of Swede-Sabbath riffs then glides into one of the band’s patented murky melodic sections.

The real cuts to watch are the ones where Grand Magus starts to push the tempo, like on “Blood Oath,” a song that can be considered a precursor to some of the band’s future gems like “At Midnight They Get Wise,” “Fear Is the Key,” and “Sword of the Ocean.” And we’d be totally remiss if we didn’t have some type of spiel regarding Christofferson’s vocals, a lot of which strike several hot irons in his he-man roar during “Nine,” “Repay In Kind” and “Light Hater.”