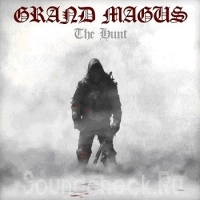 Nuclear Blast’s roster has long been in tip-top shape (something we don’t say just because we’re friends with their PR folks), but man, Grand Magus was quite the steal for them. You can say the same thing for the Swedes, who received the royal North American shaft by not having their genius 2010Hammer of the North released in this territory. It’s a pairing that should benefit both – NB has arguably the preeminent “true” metal band going, while JB Christofferson and the boys at long last get a shot at making a dent in the United States. Hugs all around.

The Hunt (the band’s sixth album) sees Grand Magus make a change in the drum throne, with Firebird/Spiritual Beggars drummer Ludwig Vitt replacing Sebastian Sippola. Not sure how much of an effect Vitt had on the proceedings, but the tonality on the album reflects that of his work in the aforementioned pair – The Hunt is less upfront with its metal angle thanHammer or even 2008’s Iron Will. Methinks Christofferson had his Kiss, UFO, and Thin Lizzy albums on constant rotation when writing…

Hard to find a bum track in the lot, with the album starting off in fine form with “Starlight Slaughter,” a track that has the swagger of Destroyer-era Kiss, only done Swedish-style. The true metal shakedown begins with the excellent “Sword of the Ocean” and picks up speed with “Valhalla Rising,” which is probably the best song of the bunch, with an emphatic chorus from Chistofferson. Elsewhere, the gripping “Silver Moon” (love the chorus) and propulsive “Iron Hand” are remarkably bare-bones (being that GM is a three-piece), but attack with a sort of boldness that certain power metal bands can only dream of.

Grand Magus is so good because they fit the bill for just about any classic or traditional metaller. Christofferson has one hell of a set of lungs on him and his riff selections are usually spot-on, especially since they’re so simple, yet monstrous sounding. The Hunt gives Grand Magus a three-album run (includingIron Will and Hammer of the North) that at the present time, cannot be surpassed in the traditional metal world. Time to get onboard with these guys…they’re not slowing down either.