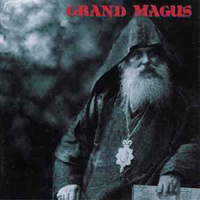 Discovering this fine Swedish traditional doom metal trio back on their 2005 Wolf’s Return album, Grand Magus have quietly made their ascent into the hearts of critics and fans with their addictive, stripped down, true-to-earth style. For those who need to delve back into their discography, Metal Blade feels up to the task to reissue their first two albums from Lee Dorian’s Rise Above label.

This debut showcases a three piece who certainly cut their musical teeth on Black Sabbath, Trouble and possibly the southern sludge of Corrosion of Conformity. Janne ‘JB’ Christoffersson alternates between a smoother midrange and slightly bluesy high range that massages your ear drums in a way only cult-like doom can for songs like “Never Learned” and “Coat Of Arms.” Bassist Fox performs double duty, acting as a liaison to groove monster Fredrik ‘Trisse’ Liefendahl’s drum exploits and then acting as almost a rhythm guitarist with his technique and tone.

And to all of the pundits who believe you can’t differentiate between one doom cut versus the other, take in “Generator” with JB’s slow building emotive guitar bends and devil horns solo salutes and the deeper effects-laden “Lodbrok” which washes your brain with visions of sleep induced dream hallucinations. The reissue contains the 2 bonus tracks that appear on the Japanese version with “Tale Of The Unexpected” being as worthy of album inclusion as the original 10 tracks and the instrumental “Grand Magus” starting with quiet cymbals and simplified electric strumming and eventually building into jam metal intensity.

Grabbing a recent Terrorizer magazine cover story, this journalist hopes that Grand Magus inspires not only the old guard but also a younger generation of metal men and women to keep plugging away, to keep striving for the alternative.