Graham Bonnet Band – Meanwhile, Back in the Garage (Frontiers Records) 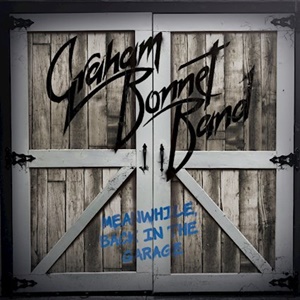 Best known for his work in Rainbow, MSG, Impellitteri, and Alcatrazz, it’s amazing how well Graham Bonnet has held up vocally at 70. Self-taught and James Dean-like for his style, record to record you know what you will get through his work. The latest effort Meanwhile, Back in the Garage features Graham in his solo band venture, featuring stellar musicians like ex-Alcatrazz keyboardist Jimmy Waldo and Jag Panzer guitarist Joey Tafolla among others running through 13 tracks of neoclassical / melodic metal with that old school spirit and cohesion shining like a beacon.

The songwriting and performances push Bonnet into familiar, comfortable territory – unleashing his unique multi-octave power and prestige, forceful and commanding while also gliding into the uplifting rhythms and musical interplay. Forsaking any extraneous intros, the title cut bursts with a Tafolla/Waldo progressive duel from start to finish, thunderous double kick action supporting Bonnet’s higher range capacities. As the album evolves, there’s more of a versatility present, where more commercial edges take shape for “Livin’ In Suspicion” and the follow-up “Incest Outcest U.S.A.” – the main hooks leaning towards his Rainbow days if put in a little bit of a Whitesnake sheen, the chorus’ pure gold for audience engagement. Joey Taffola runs through his lead guitar hero playbook, giving off that Shrapnel meets early Elegy vibe even in more of a bluesy-infused effort as “The House” illustrates through carefully measured twists and slower runs. The curve-ball cover of “We Don’t Need Another Hero”, originally done in the mid 1980’s by Tina Turner and associated with the Mad Max Beyond Thunderdome movie, shouldn’t really be that shocking given Graham dramatic melody proclivities – the verses understated and building momentum to the majestic chorus. Highlights change with each successive playback – at this point, “America… Where Have You Gone” is a neoclassical metal treasure, while the acoustic/exotic tinges to “Heading to the Light” rear back to the 1970’s, the electricity palpable, angelic background vocals melding with Graham’s careful and graceful melodies.

People should treasure the fact that this deep into his career, Graham Bonnet can continue to squeeze the best out of his voice more often than not. Meanwhile, Back in the Garage bristles with professional charm, and well worth your time/energy investment if you’ve been a fan of his in any capacity.