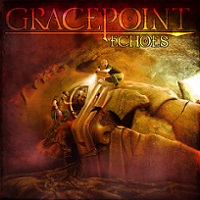 Always quite easy to get behind a release like this…just a couple of rather talented veteran metal dudes getting together to play complex, engaging progressive metal. Gracepoint got its start in the late ’90s, released an album in 2000 (Science of Discontent), then engaged in a period of radio silence for 16 years until the release of Echoes. Clearly a passion project with no huge and/or unrealistic aim of national metallic glory, Gracepoint’s obvious professional and songwriting know-how reap clear and present dividends on Echoes.

Produced and engineered by Neil Kernon (he of Nevermore, Nile, and Queensryche fame), Echoes, as you would expect, has a powerful, meaty sonic stamp. It’s the right fit given the band’s regular runs at complex rhythm and crunchy riffs. Consider them a more refined and catchy version of Zero Hour, if you will. Such a comparison doesn’t work on the vocal front, though, as singer Matt Tennesen has a heavy, hearty clean vocal delivery, that on occasion, even stumbles into Sully Erna/Layne Staley territory. It’s not a bad thing, of course, and it benefits the sprawl and melodic doings found on “Secrets” and “Full Circle.”

But what it boils down to with Gracepoint is the regular balancing act between the album’s obvious technical jaunts (“Animal,” “Bittersweet”) and it’s in-your-face, but melodically touchy jams (“July 4,” “Moon”). So really, a product like this probably couldn’t come from a bunch of young bucks, but instead a group of seasoned, well-informed metal dudes who have put together their own album with their own money that is headstrong, heavy, and to the point.