Gourmand – Blossoming from the Grave (Self-Released) 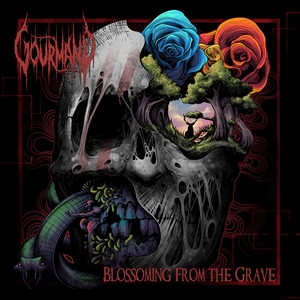 A bit of an odd name with Gourmand, though being a connoisseur of death metal would admittedly make a lot of sense. The Kansas City-based act began their mission two years ago, with a full length debut last year titled The Inquisitionist, which brings us to the recently released second round with Blossoming from the Grave.

Those who enjoy the more progressive elements of death metal are bound to be more drawn towards Gourmand. After all, outside of the usual death metal staples, there is a use of cello within their sound. “A Message in Wax” is a fine introduction to all of this, with driving near-melodeath riffing pushing the band forwards, with some explosive drumming, rumbling bass, and intricate melodies providing a more well-rounded attack. The cello introduces some melancholy to the approach, enhancing some emotion into the heavy leanings without becoming too much of a distraction. The sense of atmosphere is palpable when the band is weaving all of these elements together (“The First of My Name”), but some more feral tracks also help to flesh things out, such as the frantic “Metamorphosis” or the one-two combo of the most melodic in the stirring “Redemption” and “Siren’s Song,” which features some clean vocals as well. With the pleasantly diverse offerings within the album, be it technical, progressive, or melodic, the one slightly lacking piece is that of retention. The brutality is strong, the melodies are enriching, yet as the album comes to a close, after repeated listens, there’s an ‘it’ factor that doesn’t seem to have a strong enough presence to draw this scribe back – though it’s clearly not for a lack of trying.

There’s a strong sense of musicianship at play with Blossoming from the Grave, and the use of cello is great inclusion. Yet there’s some miniscule ingredient keeping Gourmand from total domination. Once they find it, expect many to be raving about what they have to offer.