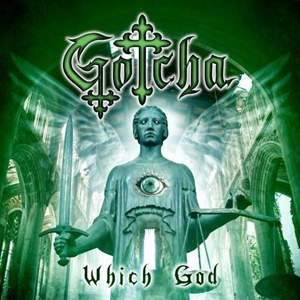 Professing a nothing off the table approach to heavy music, Gotcha hail from Lexington, Kentucky – releasing their new album Which God containing eleven tracks of material that melds together everything from southern groove and semi-doom strains to classic hard rock and heavy metal traits. The tones and production value have a live off the floor aspect – the bass playing as important a role in shaping the Gotcha sound as the crunchy guitars, rock solid drumming, and bluesy-driven powerhouse vocals. Most of the songs possess that semi-commercial slant while remaining heavy – not an easy combination to meld together.

It’s evident throughout songs like “Shuffle the Deck” and the lower-bass driven shuffle groove for “Big Ole Hole” that these musicians love the work of say Rob Zombie and Black Sabbath just as much as Corrosion of Conformity (Pepper-led era) and 90’s Metallica. As a singer Michael Duncan has that larger than life range and booming bluesy/southern charm within his voice – along with the pronounced Tool-like bass ethics Phil Osborne delivers takes “Paid To Prey” to that darker, edge of your seat dynamics that could be a future Gotcha set favorite. Additional sound clips from news anchors filter in and out of specific tracks, adding ambiance and context to the lyrical content on display. Later the band take on the Three Dog Night cut “One Is the Loneliest Number” and add a bit of metal spin on things, Michael using more of his lower register to perfection during the emotional verses. Gotcha embrace a songwriting style and outlook where they want the listeners to let those daily frustrations of work stress or personal problems through heavy music, joining in the celebration of their influences and leave feeling so much better in the end. Most will appreciate the solid guitar chops of Chris Griffie as well as the overall focused effort in terms of hooks, melodies, and memorable, catchy choruses – always trying to encourage some fist pumping antics.

There are plenty of reasons to still enjoy old-fashioned heavy music with some modern angst and spirit – Gotcha are a group to watch as they have the skills to go places.