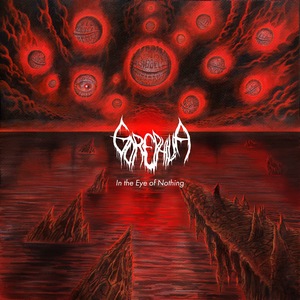 Finnish act Gorephilia has faced some challenges in getting this third full-length out to the public. After vocalist Nemesis took his own life at the end of December 2018, the band was able to march on – now as a four-piece with guitarist Jukka Aho now commanding the vocal position as well. In the Eye of Nothing is a testament to well-build death metal, to describe it in a few words.

A distinctly ‘90s vibe does ooze from the speakers when listening to In the Eye of Nothing. Particularly when the band slows down their music, and really lets the murkiness of the riffs bubble up to the forefront. While there are some clear influences still at play, you’ll have a hard time focusing solely on that option as the shifting tempos and enjoyable grooves keep you intrigued. The band isn’t the type to simply plow away at stupidly fast tempos, instead they meander and creep through mid-tempo arrangements that can slither in evil sounds but stay quite memorable in the long run. The pounding grooves of “Not for the Weak” and the crawling “Devotion upon the Worm” prove that the band doesn’t have to keep the accelerator down, even if other tracks like “Ouroboran Labyrinth” showcase the fact that they can do exactly that with triumphant riffs and blastbeats. Coupled with a production that makes it feel a bit retro, but still keeping a listenable feel to it, there’s a lot to enjoy here.

In the Eye of Nothing is solid old school death metal that knows what finer points need to be hit without feeling to similar to what’s already been done. There’s atmosphere, aggression, and just enough melody to get plenty interested in the act if they haven’t already been hip to check them out.