Goes Cube – In Tides and Drifts (The End Records) 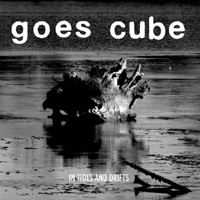 Imagine a filthy three-way pile-up between Kylesa, These Arms Are Snakes and Torche jamming Floor songs. If that’s getting you aroused in the downtown, trouser area and setting your ears a tingle you’re in for a treat with In Tides and Drifts. The follow-up to 2009’s astonishing Another Day Has Passed, it shows no decline in quality. They may not have made as much of an impact on the scene as you would have expected with that release, but here they should definitely cause ructions. Grab a few cans, sit back and get ready to get pulled under.

Thunderous riffs and a flurry of noise erupt from the speakers from the moment opener “Safety Coffin” begins. Like early Kylesa on a rampage, it’s not long before the groove rides in on a horse labelled head-bang. For more of that skip down to the arse-end of the record for the brilliant “The Ban Has Been Lifted.” The Mastodon-like “Thunderheads” is very suitably titled, sending angry clouds laden with scaling riffs your direction, while also employing brief, droning plateau sections to balance out the lightening strikes of the drums.

Elsewhere, there are hooks aplenty to found and shouty melodies welded onto pummeling drums and sky-scraping guitars. Goes Cube unleash the fury and channel the energy of early Mastodon and the hugeness of Kylesa in the slow burning moments that’ll make you wish you were in a tiny venue, with sweat dripping off the roof. Then, right at the end, when you don’t see it coming, the title track slips in all tender initially with nostalgic vocals from Anti-Folk singerJaymay, before getting quite dangerous. Her voice haunts the speakers while musically the storm builds around her erupting in pummeling guitars and drums that wrap around in swells of noise that crash over you like waves.

The more laid-back moments are well spaced out, calling to mind These Arms Are Snakes’ Tail Swallower And Dove in their delivery. “Lines on the Map” (which has an absolutely astonishing outro) and “The Story Is the Story Goes” veer majestically between this and an almost full on Converge-style attack. Generally though, they stick to the fast and furious, hard-hitting drum snaps, coated with thumping bass, as evidenced during “Small Fish, Small Pond,” which also contains some moments that’ll stop you in your tracks.

In Drifts, In Tides may touch the cornerstones quite readily but in no way does it suffer because of it. Goes Cube mix it all together so well and with such energy that you can’t help but let this into your heart. Don’t make the mistake of writing these guys off as just another bunch of beardies with big riffs. There’s plenty here that’ll leave you gasping.