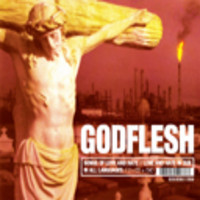 Musically, you can’t fault this little box set at all. Originally released back in 1996 Songs Of Love And Hate was a bleak masterpiece that has stood the test of time thanks to it’s powerful product. Whereas previous Godflesh efforts have dated thanks to poor mixes, this record is still as harsh and bleak as when it was released. Big, meaty riffs abound over sparse industrial beats and thudding bass notes while Justin Broadrick’s vocals are simplistic in approach, raw and howled, being more rhythmic than anything previously.Songs Of Love And Hate is rarely broadcast as an essential Godflesh album, but it shows them the height of their industrial strength. Having gone for out and out noise in the past (Godflesh) and bringing in melodies (Pure), the blueprint this time was simple – battering, machine-like songs

with massive, often Helmet-like, repeated riffs. The chugging thump of “Gift From Heaven” is a great place to start if you’re not familiar with this album.

Followed in 1997 by the remix album Love And Hate In Dub, the original songs were stripped down to their bare bones and in many cases, rendered much, more atmospheric. The industrial elements are carried across, especially in the bass sound and unlike most other remix albums, instead of just firing some pumping beats underneath, these songs have been fully deconstructed. “Almost Heaven (Closer Mix)” for example, shows a complete tear down, “Frail (Now Broken)” hints at the direction which would eventually be taken by Jesu, while “Gift From Heaven (Breakbeat)” is reworked into a darker, much more spacious piece. The groove of the original album remains intact and given a new twist here on a record that holds its own definitely against the source material.

Despite bringing together Songs Of Love And Hate and it’s follow-up remix album, Love And Hate In Dub this collection won’t offer up much to the hardcore Godflesh fans as there’s no bonus material whatsoever. The In All Languages DVD

included here has also been released previously, although it’s notoriously difficult to get a hold of, so that’s a plus for anyone who doesn’t have it already.

For £10stg you can’t really give Earache grief about this but some linear notes, like from the Iron Monkey box, or a few unreleased/bonus tracks/mixes would have sweetened the deal

for those who already own these albums.