Goatwhore – Carving Out the Eyes of God (Metal Blade Records) 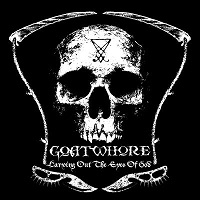 God is the target this time out for Goatwhore. Not Hurricane Katrina or the painstaking healing process singer Ben Falgoust endured after a 2003 van accident. It’s a fitting approach for the New Orleans quartet and with Carving out the Eyes of God, this has translated into what could be their finest hour, outlasting the very solid A Haunting Curse and seminal breakthrough Funeral Dirge For the Rotting Sun.

Hats off to producer-in-demand Erik Rutan (Hate Eternal, Through the Eyes of the Dead, Cannibal Corpse) for pushing the guitars right to the front of the mix. Sammy Duet’s guitars dominate the bulk of the album, allowing for his sub-Celtic Frost riffs to take hold. This is none more prominent on “The All-Destroying,” where Duet weaves punky, cross-over thrash with thick, muscular riffing.

In fact, there are multiple Grade-A riffs across the board. Check out the winding speed-picking of the title track, or the sludgified action of “Provoking the Rituals of Death” or the To Mega Therion-Southern-style romp of “Reckoning of the Soul Made Goddess.” Duet and co. taken primal, pre-90’s riffing to a new level and couple that with Falgoust’s all-out assault on organized religion (lots of insightful, quality lyrics here) and this amounts to what is the most varied Goatwhore album to date.

Already the subject to much buzz in the underground, Carving Out the Eyes of God could very well be the album that vaults Goatwhore to the next level. It’s good enough, that’s for sure.