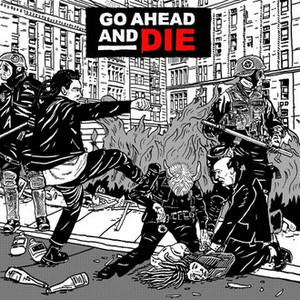 Certainly, when the name Cavalera comes up it’s bound to pique the interest of a large amount of metal fans. A collaborative effort between Igor Amadeus Cavalera and his father Max, coupled with the notion of a band playing some old school extreme metal complete with a current message behind the music, is going to turn even more heads. But the band’s debut is more than ready for all of this, with a raw and energetic sound that’s easy to get behind.

Mixing together elements from death metal and thrash along with a helping of crust and punk attitude, Go Ahead and Die legitimately feels like an album that could have immerged in the ‘80s. The raw grit and unpolished feel (though admittedly more modern in overall production value) is dead on, and influences of acts ranging from Celtic Frost to Napalm Death gives the music both some groovy as well as furious elements. They aren’t afraid to hold onto a catchy midtempo riff (“Worth Less than Piss”) when the moment calls for it, but they also gravitate towards that more unhinged, crust/punk tempos laced with thrash at a moment’s notice. The tone overall is one of discontent and anger, and the grimy tone to the riffs is entirely suiting given the scathing lyrical stance, showcasing disgust at a variety of current topics. The vitriol can be all but tasted in the thrashy riffing and barks of a song like “Punisher,” as the track also sprinkles in some samples to augment the lyrics.

Channeling all of their frustrations into the music, Go Ahead and Die unleash a potent mix of Celtic Frost-like grooves with explosive and thrashy rage. As such, it’s a release perfectly suited to the times, while championing a sound that is written like a love letter to the past.