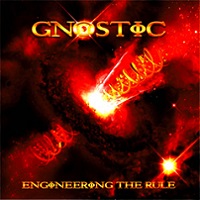 Sort of a primer for Atheist’s first record in 16 years, Engineering the Rule bears several, if not too many resemblances the legendary tech-death crew. This shouldn’t come as a surprise, considering long-standing Atheist drummer Steve Flynn and current Atheist lead guitarist Chris Baker and bassist Jonathan Thompson are the primary constituents. The only thing missing is Kelly Schaffer.

This one’s tricky, because it picks right up where Atheist left off, loaded with technical tenacity and bite, especially from singer

Kevin Freeman who can either annoy or impress – it’s give or take. The problem is that it will most likely cover all the ground Atheist plans on covering, begging to ask: what’s the point?

Flynn is still a whirling dervish behind the kit, adding colors and shades to stellar numbers like “Isolate Gravity” and “Wall of Lies” and even tosses in a quick

solo during “Life Suffering.” The arrangements are off-the-wall, unconventional and don’t add up like Atheist and even some of the riff-runs are straight out of the band’s early 90’s playbook (“Sleeping Ground” is the most prime example of this). In fact, if you shoved Schaffer on the mic, this could be the new Atheist album. No one would be fooled, which is fine – Engineering the Rule is actually more deserving of its above rating. But…

If we look at it from another angle, there are those out there still unfamiliar with Atheist and their trifecta of pre-tech, technical death metal, soEngineering the Rule has a chance with that minute crowd, wherever they may be. For the rest of us though, it’s like a movie preview

or opening act. Who knows, this could very well be better than the new Atheist. Guess we’ll find out soon enough…