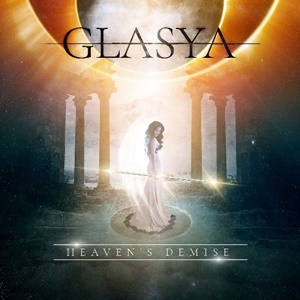 Founded in 2016 through guitarist Hugo Esteves desire to combine orchestral arrangements in metal with a more dramatic/cinematic flair, Glasya developed over the next two years into a sextet of musicians. They would release “Heaven’s Demise” as a single last year – setting the stage for the debut full-length, aptly given the same title. Considering the relative quick time to gel, write and record this ten-song affair, it’s quite evident the band embrace a sound that can be progressive, classical, and contain ethnic influences that many symphonic metal followers will appreciate.

Right away the operatic grace and trained voice of Eduarda Soeiro will grab the lion’s share of early attention. As well she should, when taking in the soaring notes of “Ignis Sanctus” against the heavy mood shifts and double kick tempo parts against the syncopated guitars and orchestration it’s quite an earful of aural information that hooks you instantly (even the wah-wah lead break has a stunted, hypnotic effect). Keyboardist/ orchestration specialist Davon Van Dave layers his parts to set an emotional kaleidoscope of colors – “Coronation of a Beggar” some of his best work, while “Neverland” takes you back in to the Shakespearean-era, the latter setting up tribal drumming and graceful guitar parts that have a bit of gothic/power punch to them. Obviously Nightwish circa the early years with Tarja spring to the forefront at times (the ballad “Birth of An Angel” and the title cut) – but Glasya also display a love of ethnic strains during “Glasya” and some slightly progressive off-time dynamic elements during “No Exit From Myself” that separate them from the pack – Eduarda rearing back for eagle-highs that contrast against the whispered male background vocals in the latter highlight. It’s as if some of Portugal’s biggest metal band Moonspell has rubbed off on Glasya in terms of pushing boundaries and using outside influences to allow an organic flow to encompass the front to back album listening experience.

With plans to tour and perform at festivals, Heaven’s Demise should help Glasya cement their status as a worthwhile up and comer in the symphonic metal landscape.