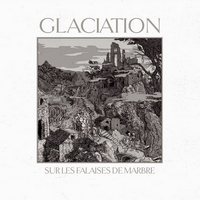 Just say the word(s): “French black metal.” For those in the know, French BM remains the most forward-thinking of the style’s geographical bases, with bands like the totally-excellent Blut Aus Nord and Deathspell Omega leading a charge that bucks norms, and takes chances. It’s a good reason why most of these bands are worth a gander, including Glaciation, who on some level, are an all-star ensemble. Some quasi-familiar faces abound: Alcest drummer Winterhalter and live bassist Indria, and perhaps most importantly, former Anorexia Nervosa vocalist RMS Hreidmarr, whose talents are being wasted in electronic rockers CNK. Semi-big names are nice, but does Sur les Falaises de Marbre (“Upon the Marble Cliffs”) hold weight? Indeed it does.

On the surface, there isn’t as much risk taking from Glaciation in relation to their peers. Sur les Falaises de Marbre is more of a slow-burn, in that the voluminous riff segments and extremity peddles come in waves rather than being non-stop. One could point to the gorgeous atmospheric tail-end on “Kaputt” as being a primary example of how Glaciation plays it on a spacious level. Then again, the grinding “Les fiancées sont froides” features enough classic BM riff head-winds to go around, while the gentle title track (which closes the album) provides a direct tie to the band so many will tie in, Alcest.

Hreidmarr’s vocals, for some odd reason, don’t have the same penetration as they did when he was singing for Anorexia Nervosa (it could be because he’s singing in French), and Alcest mainman Neige drops in somewhere for a guest spot (we tried to identify where, but to no avail). But nevertheless, Sur les Falaises de Marbre is an immense listen, even if it’s not the sum of the French black metal whole. Instead, Glaciation positions itself as something more than a round-up of France’s extreme metal inner circle. They’re a bonafide force.